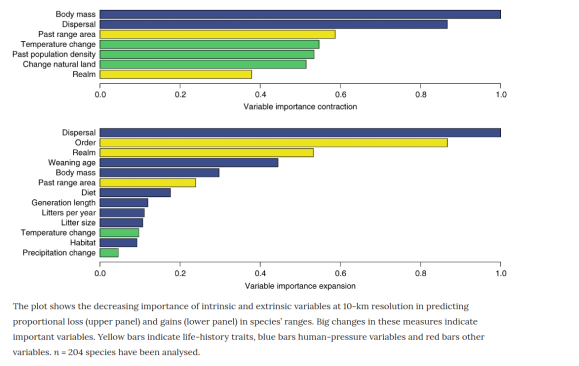 Understanding changes in species distributions is essential to disentangle the mechanisms that drive their responses to anthropogenic habitat modification. Here we analyse the past (1970s) and current (2017) distribution of 204 species of terrestrial non-volant mammals to identify drivers of recent contraction and expansion in their range. We find 106 species lost part of their past range, and 40 of them declined by >50%. The key correlates of this contraction are large body mass, increase in air temperature, loss of natural land, and high human population density. At the same time, 44 species have some expansion in their range, which correlates with small body size, generalist diet, and high reproductive rates. Our findings clearly show that human activity and life history interact to influence range changes in mammals. While the former plays a major role in determining contraction in species’ distribution, the latter is important for both contraction and expansion.