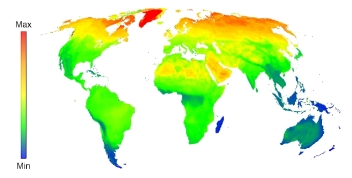 Geographic range size is the manifestation of complex interactions between intrinsic species traits and extrinsic environmental conditions. It is also a fundamental ecological attribute of species and a key extinction risk correlate. Past research has primarily focused on the role of biological and environmental predictors of range size, but macroecological patterns can also be distorted by human activities. Here we analyse the role of extrinsic (biogeography, habitat state, climate, human pressure) and intrinsic (biology) variables in predicting range size of the world’s terrestrial mammals. In particular, our aim is to compare the predictive ability of human pressure vs species biology. We evaluated the ability of 19 intrinsic and extrinsic variables in predicting range size for 4,867 terrestrial mammals. We repeated the analyses after excluding restricted-range species and performed separate analyses for species in different biogeographic realms and taxonomic groups. Our model had high predictive ability, and showed that climatic variables and human pressures are the most influential predictors of range size. Interestingly, human pressures predict current geographic range size better than biological traits. These findings were confirmed when repeating the analyses on large-ranged species, individual biogeographic regions and individual taxonomic groups. Climatic and human impacts have determined the extinction of mammal species in the past, and are the main factors shaping the present distribution of mammals. These factors also affect other vertebrate groups globally, and their influence on range size may be similar as well. Measuring climatic and human variables can allow to obtain approximate range size estimations for data deficient and newly discovered species (e.g. hundreds of mammal species worldwide). Our results support the need for a more careful consideration of the role of climate change and human impact – as opposed to species biological characteristics – in shaping species distribution ranges.